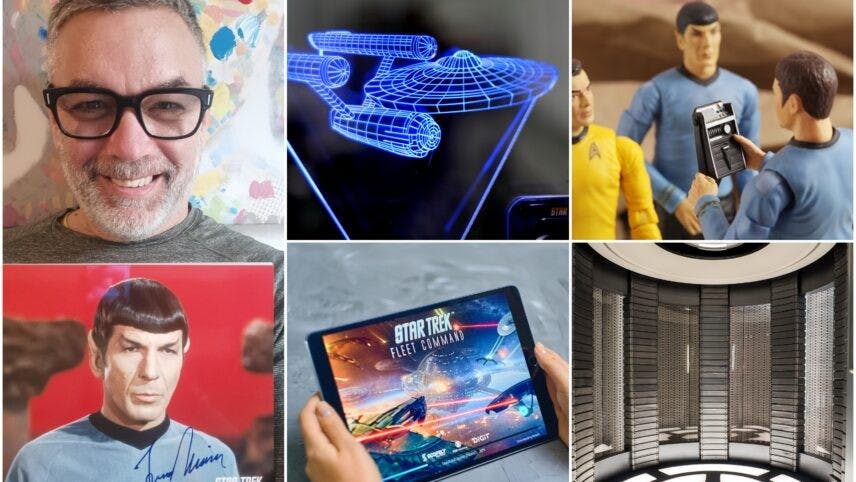 Estonian startupper from UK: many of the inventions we find important are actually from Star Trek!

Jim Sharman came to Estonia in 2018 and never wanted to leave. He is currently working in Levercode, which is developing a new identification software. Here he talks about how he came to be in Estonia and eventually join LeverID.

Tech enthusiast, sci-fi fan and communications specialist, Jim Sharman, came to Estonia in 2018 for a ‘Clean World Conference’ and enjoyed it so much that he never wanted to leave. Having previously lived in Sweden, as well as Slovenia, Jim now works as Head of Communication at LeverID, part of the core tech think-tank Levercode group. They set new standards for, amongst other things, secure and robust digital identity solutions.

When was the last time you were amazed at how effortless technology can make our lives?

It was a couple of months ago when my friends from the UK came to visit. They were going to call a taxi, but I proposed hiring a Bolt rental car. My friends said at first, “Don’t bother with that hassle,” then were shocked at how easy it was. They had the same reaction to money transfers – the simplicity of it all took them by surprise; no long passwords or anything of the sort. It really irritates me when I have to log into an environment I haven’t used in six months and then have to figure out how to access it. Modern digital ID tools are highly efficient and there is no need for complex passwords.

You and I both represent a generation who watched Knight Rider as kids and were utterly blown away that this guy talks to his car through a watch!

You’re speaking to a Trekkie (Star Trek fan – ed. note). I was a massive sci-fi nerd while growing up. There’s even a great documentary about how Star Trek has influenced the development of technology. In it, several scientists share how they were inspired by the technological advancements they saw there as children: things like self-opening doors, Bluetooth, and even tablets. Take replicators; now we have 3D printers. There’s no doubt in my mind we’ll see teleportation some day…

I’m so firmly based in the 20th century I’m not so sure I’d dare take myself apart and re-materialise on an atomic level. Wouldn’t you be afraid?

Jeff Goldblum has this movie, The Fly, where a fly slips into a teleportation chamber with a human, causing the DNA of the two to get mixed up with some rather spectacular results. But if you think about it, we teleport ourselves all the time, it just happens very slowly. I used to be a meteorologist and I've learnt that energy and matter are constant, they don’t go away, they just transform. Even the molecules that once made up Julius Caesar are still around somewhere...

I understand that science, technology and creativity have always been intertwined in your career?

I switched from meteorology to communication in the 1990s. When I was in school, I enjoyed language classes the most, French was my strongest subject. (Maths, by the way, was my weakest.) At the age of 11, I was fascinated by water: how is it possible to touch it, but it still keeps running through your fingers? On my very first report card that first term, my Physics teacher wrote I could easily become a scientist if I stopped asking questions about everything all of the time. Really? That nearly put me off science forever. But it did bring me closer to communication, because the reason I kept questioning everything was to be able to understand and be better understood.

How did you end up in Estonia?

I was asked to join the ‘Let’s Do It, World!’ team when I came here in 2018 to attend a related conference and I simply never left. During the World Cleanup Day project, I met Riho Kruuv, who was the Estonian Ambassador to India at the time, and I was very impressed with his communications expertise. The way he helped me really inspired me.

How did you end up in LeverID?

For me, Riho Kruuv is the four-year connection between LeverID and Let's Do It World. I already had an interest in Levercode for some time, but Riho and I had worked so well together before that I told myself I’d like to team up with him again some day. I did some consultancy for Levercode at one point and I learnt what LeverID was about, so I was intrigued. I also remembered how pleasant it was to communicate with Riho, so I made it a point to work with him again some day. When that chance came, I took it eagerly.

When you work with people who are that inspiring, you find that your own communication skills also improve. And, of course, our team has greatly improved my knowledge about technology.

As mentioned, even as a child I was interested in how technology makes our lives better. Science fiction novels and movies often play on human fears, but there is also much joy from the free time we have thanks to technology. At the same time, it’s important to make sure that the data which technology uses to operate is accurate and secure.

How does this connect to LeverID for you?

Levercode and other companies in our group don’t just come up with random technological solutions; the idea is about making our lives better. Our goal at LeverID is to facilitate the transition to a simple and secure global digital identification system. Our vision is that of a connected, interoperable world, based on a robust, efficient, simple and reliable global digital transition.

The time and energy saved by individuals, companies and countries will bring us closer together and help us communicate better. LeverID is a great tool to this end.

In a sense, my current job is a dream opportunity, because in combines three of my greatest passions in life: technology, communication and of course Estonia. 💙🖤🤍